In recent months several Bristol Stalwarts have died.  You will have seen the obituary of Martin Barnes but in the last few weeks we have lost Brian May, someone who has been involved with Bristols for more than 50 years, and Mick Bryan who was a well-known Midlands Bristol owner.

As a part of the Bristol fraternity, Brian was famous for his small holding on the edge of Solihull.  He had been buying, repairing Bristols before he moved from London to Solihull but the activity grew and he had a warehouse from which he sold cars, including those of ex-cabinet ministers, and stored spares. Anyone who visited his premises will remember the polytunnels full of cars, in various states of disassembly and bits extracted from a variety of cars not always stored in the best of conditions.  He had a workshop where cars were restored and through which some rare examples passed over the years.  If he was not sure where the bit you needed was stored he was very happy for you to explore to try and find what you needed, he was there to be a friend to Bristol owners and wanted the cars to be enjoyed.

He was renowned for his ownership of a number of particular cars, the very rare Bristol bodied by Beutler, the Swiss coachmaker, and his 403 (SHY 100).  He was always supportive of new owners, allowing people to settle the cost of cars over the time they could manage, trusting that the spirit of someone who bought a Bristol was such he could be confident of their commitment to meet their obligations.  Over recent years, as he re-focused on the 6 cylinder cars, he was generous to other Bristol owners, giving away spares which he no long felt were core to his business.  The Bristol body would have been poorer without him and his loss will have a huge impact at a time when access to Bristol expertise has been significantly reduced.
Brian’s wife Jean spoke to John Lawley and we are so grateful to her to be able to report his account of her recollections of the man.

Brian was born in 1933 and as a child was brought up on a farm in Surrey.  He witnessed a lot of wartime air traffic over the south of England and often a stray bomb or two.  Once he saw where a bomb landed but did not explode so at the mischievous age of 7/8 he ran to where it landed but was told not to go near it – but Brian, being Brian, decided to throw a brick into the hole to see if it would explode – then run like mad.  It didn’t explode but his father caught him and told him to run home and wait for his reprimand   At this stage it was obvious that this boy had an enquiring mind which led to a lifetime of questioning the unquestionable and making quite logical decisions.

At 17 he joined the Royal Navy and served on HMS Belfast working on the big guns but this was responsible for damage to his hearing which was a trouble to him throughout his adult life.  He began boxing when he was in the Navy and apparently had quite a number of fights but only lost one.  Apparently, he used to tell the story of actually being so afraid at first in the ring so went out determined to knock the opponent out as soon as possible and this seemed to work for him.  At 21 he left the Navy and went to live in London – sharing a flat with 3 other chaps but had to start work life at the bottom of the ladder which resulted in doing such jobs as selling silk stockings and scarves, dinner services and tea sets.

After this period, he was helped by his uncle to get a job in the science lab at G.E.C. where they were making rubies for commercial purpose.  He, of course, thought it would be interesting to take a few to Hatton Garden to see if he could sell them.  They were very interested and asked where he had got them from – he told them where and they paid him £10 but unfortunately the jeweller rang G.E.C and Brian was instantly dismissed.

A friend heard him singing in the flat they shared and said he should visit his mother who taught singing so he went along to meet her and she said she could do something with his voice and he began training and also attended the Guildhall School of Music.   This period resulted in him doing auditions, cabaret dinners and other gigs plus a summer season on the south coast where he met his first wife.   They lived in Neasden, north London for a few years and this is the period in which he was introduced to the Bristol car.  He worked outside their home and quite a few of the cars came his way, attached to some humorous stories.  He moved to Birmingham where his parents-in-law lived and began a family, 2 children, Jason and Fiona.  The Bristol car became his passion.

Brian met Jean when she was singing in a club and, as his marriage had ended 4 years earlier, he was free to make a fresh start.  They married 5 months after meeting which was 44 years ago and they have a son, Greg.    When they celebrated their ruby wedding anniversary Brian had one of the G.E.C. rubies made into a ring for Jean so that story will survive along with the wonderful memories of him.  Also, during this period, Brian hired the Birmingham Town Hall to conduct a one-man concert and many Bristol owners were invited and probably still have a CD of that concert.

Jean says she wouldn’t have missed it for the world as both of their careers and experiences brought them into the company of many, many wonderful people and the Bristol car seems to attract the eccentrics, the artistic, the gentle folk of England.  She knows at this stage that Brian was so highly thought of with Bristol enthusiasts and all will miss him greatly as he left behind a wealth of knowledge and many cars and spares.  All best wishes to all BODA members from Jean May.

A message from our member Graham Wilman

Hi, I was saddened to hear about the death of Brian May.
I was lucky to have met Brian at his home when I arranged to collect some parts for my 401.
Interestingly enough it transpired that my Bristol was the first Bristol Brian owned (UML 838) and while I was with him he retrieved an old photograph with him stood with the car – he gave me the photograph which I will keep with the car.
The car is nearly ready for the road now and it would have been my intention to take it to show Brian, sadly this cannot now happen.
A sad loss to the Bristol fraternity.
Regards
Graham Wilman 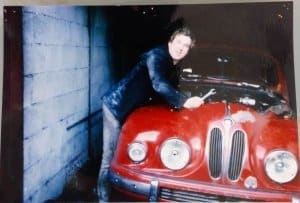 Mick Bryan was a Midlands Bristol owner who became a key player in the Sporting Bears.  Memories of Mick and Bristol include the story of how, having bought a 407, the bonnet came open driving down the motorway bringing the car home and bent.  In his anger he slammed it closed expecting the bend to remain and seeing a significant bill to sort it out but when the catch held it looked like nothing had happened. Mick was also a Porsche man driving a 944 before upgrading to a 968.  For many years, Mick was the face of Dream Rides at the NEC, making huge sums for the charities supported by Sporting Bears.  This activity took months of planning each year.  He negotiated with and gained sponsorship and support from a huge range of organisations from car manufacturers to petrol suppliers.  This gave people a chance to experience a ride in a car of their dreams and a number of current Bristol owners had their first drive at the show and were hooked.  In recent years he and his wife devoted huge amounts of their time to the care of his wife’s aunt and this is a further testament to the nature of a man who will be fondly remembered by all who came in contact with him.