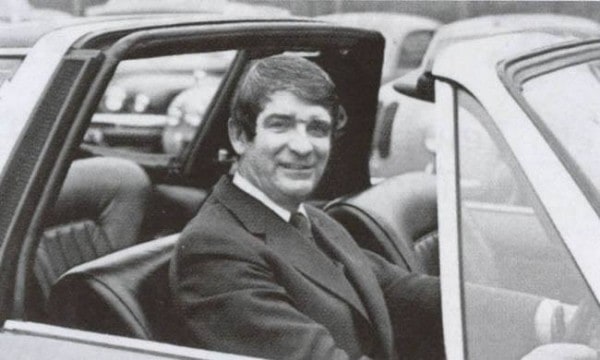 Thomas Anthony Donald Crook (T.A.D.C. or ‘Tony’) was born on 16th February 1920 in Rusholme, Manchester, Lancashire as the second child and only son of a local coal merchant and mining family.

His early years were spent as part of a successful local family in and around Hoghton in Lancashire.  After the death of his father when he was six, Tony was brought up by his Mother and Aunts and an early treat was being taken to see motor racing at the nearby Southport Sands.  At that point Tony decided to become a racing driver.  Juvenile driving exploits whilst at school, Clifton in Bristol, with his first car (MG – Magnette) bought before he was old enough to drive only whetted his appetite.  From Clifton to Cambridge to study      and onto the RAF.

Tony’s racing driving hero of the time was Raymond Mays but other key cars and personalities from this early time included Robert Arbuthnot, racing driver and car dealer who sold him a 2.9 litre short chassis Alfa Romeo in 1943.  Tony had also bought a BMW 328 which he used extensively during and immediately after the War.

Tony did not want to join the family business and decided that some kind of garage business would pay for his racing, so after the War Tony decided to move South to Caterham in Surrey being near Kenley Airfield where he could keep his plane and his cars.  So he bought premises and turned them into a garage and workshop.  At this time he met and was associated the Aldington Brothers, owners of Frazer-Nash, and responsible for importing BMW’s into Britain before the War.  Their short-lived association with Bristol Aeroplane led to Tony becoming one of the first Bristol Dealers.

Tony’s life then entered its busiest phase, building a business and racing activities as well as being a family man.  Tony had married Diane straight after the War and their daughter Carole came along.

His racing highlights included the first Prescott Hill Climb with his BMW 328 (2nd place), the first post-War race at Great Gransden Lodge on 15th June 1946 organised by the Cambridge University, Automobile Club (1st place), participation in the first race at Silverstone in 1949, Alfa Romeo,1st place and the 1952 Prix De Monaco where Tony came 3rd overall in his Frazer Nash Le Mans Replica.  Tony credited his success to his faithful mechanic John Dennis who battled constantly with the factory preparation.

During the ten year period 1945 to 1955 Tony calculated that he had participated in over 400 races, sprints, hill climbs and long distance record attempts.  Although closely associated with Bristol cars at the time, Tony’s racing sponsorship from ESSO required him to drive in 1953 for Frazer Nash at Rheims rather than Bristol who were sponsored at that time by (Shell or BP?).

Tony had promised to give up racing after the 1954 season but was talked into entering the 1955 Goodwood 9 hours race in his famous Cooper Bristol.  Late in the race Ken Wharton (Ferrari) broke a con rod going into the chicane and spun.  Moss (Porsche) behind unavoidably hit the Cooper in the side, throwing Tony out of the car and cracking his head.  A two week hospital stay ended Tony’s racing career. 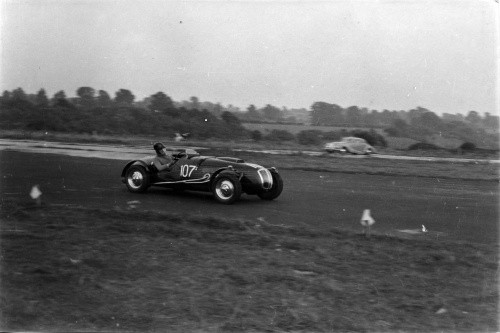 This allowed Tony to concentrate on business and having established ‘Anthony Crook Motors’ at Caterham the need for space prompted a move to Hersham in ( date    ).

At that time Tony carried Bristol, Simca, Fiat distributorships; was UK concessionaire for Zagato and Abarth; was agent for AC, Aston Martin and Lagonda, Piper Aircraft and Brantly Helicopters as well as running a multi-pump Esso Petrol Station on both sides of the road.  A turning point came again in late 1959/early 1960 when, George White (3rd Baronet), took the lead by acquiring Bristol Cars from the rapidly reorganising British Aircraft Corporation with Tony as the Junior Partner.  The relationship endured and Tony’s relationship with George produced the 407, 408, 409, 410 and 411 Cars.  Tony would reminisce about the ‘Golden Days’ and say that the two never had cross words and only two policy disagreements (the first about automatic gearboxes – George won and secondly about the need to continue producing and storing spares – Tony won).  Their relationship changed again after George’s terrible accident in 1969 and in 1973 Tony acquired George’s shares to become sole proprietor.  This step, together with the oil crisis, required Tony to sell the freeholds on his other businesses to concentrate on Bristol’s.

Tony’s busy life at that time was based at Headquarters in Kensington with Service Facilities at Chiswick and manufacturing at Bristol which Tony would visit 3 to 4 times a week.

Thanks to Tony’s enormous capacity for hard work and an enormously loyal workforce Bristol survived and thrived through the economical disruptions of the 1970’s 80’s and 90’s.  Production rates undoubtedly fell but Bristol’s loyal customers continue to support Tony and his staff with the 603, 412 and the named cars, Beaufighter, Britannia, Brigand and the last of the ‘Tony era’ cars the Blenheim.

In 1997 Tony took the advice of Brian Trubshaw, his friend and Concorde Test Pilot and made arrangements to sell Bristol Cars to Joe Lewis’s Tavistock Group with Toby Silverton at that time Joe’s son-in-law as his co-Director.

Tony never met Joe Lewis despite requests.  Tony had the security, he believed, of an employment contract until his 90th Birthday and that gave Tony the confidence to sell the final part of his share holding to Tavistock in 2004.  Business continued much as usual at first and Tony was confident that he had found a suitable successor.

Things were not be, and despite the interest shown in the Fighter little happened between 1997 and 2007 when Tony left the Company.  He told me that he had turned up for work one morning, only to find a security man on the door barring his way and the locks changed! Naturally he was devastated and at Christmas that year his card said:

Later in 2008 an announcement appeared ‘due to a disagreement on the future running of Bristol Cars, Tony Crook who had been with the Company for over sixty years, most of the time as the sole shareholder, was dismissed’.  These matters were settled at mediation on 7th April 2008.  Bristol Cars Limited went into administration in 2011.  Tony’s sadness and disappointments were tempered by the continued loyalty of his secretary of 46 years standing and his friends and he continued to make appearance at various historic car events, speaking for instance to the Frazer Nash Car Club in 2009 and he was at the Goodwood Revival in 2012, sixty years after competing in the Inaugural Meeting in September 1998.

In 2008 he reminisced “in 1948 the Duke of Richmond and Gordon – the present Earl of March’s Grandfather – opened the course in my Bristol 400 and the same car was used to open the course at the Inaugural Revival Meeting in 1988 so I have fond memories of the Sussex circuit despite ending my racing career there in 1955”.

An enduring and endearing aspect of Tony’s personality was his great sense of fun – almost schoolboy humour – might say some.  Tales of dressing up as an Arab and placing orders for cars on competitors stands.  Tales of paying tramps to visit the Bristol stand, having animated conversations as they apparently placed orders to watch them be pursued by the competition abound.  On many occasions people misdialed and rang the Showroom thinking they were onto Motorail and Tony would book their car onto the train, asking them what colour their car was and, irritated, they would ask what has that got to do with it, to be told that Motorail were not taking green cars on the day.  This amused him for years until mercifully Motorail moved to Euston.

Tony’s wife Diane died in May 2011 after prolonged illness and he is survived by his daughter Carole and his elder sister Margaret.