A group of us from the Bristol Owners Heritage Trust went to Bristol Cars at Windlesham on Thursday for a socially distanced viewing of the sad remains of Bristol Cars Ltd and Bristol Cars Services Ltd., now both in liquidation.

Some of you may have noticed that we have given the website a new look and at the same time we have improved its security.

In recent months several Bristol Stalwarts have died.  You will have seen the obituary of Martin Barnes but in the last few weeks we have lost Brian May, someone who has been involved with Bristols for more than 50 years, and Mick Bryan who was a well-known Midlands Bristol owner.

We write with news on Bristol Cars liquidation and events that were planned and have obviously been cancelled. As you will be aware, the world has changed very significantly recently. This communication is to bring you up-to-date with the position at the moment so we will address the issues in some order of priority.

Firstly, given the emerging situation regarding Covid-19 we have shelved all plans to run events this year.  Those we have previously promoted have already been cancelled.  Given the time we all have to now work on our cars, we expect to see an immaculate fleet of cars on display next year!

Secondly, it is our sad duty to inform you that the long standing stalwart of the Bristol scene and clubs and a good and close friend to many members, Brian May, died last week after a short illness.  It is quite a shock as, if you knew Brian, you would never have guessed as he was his usual jolly self to the end. He will be greatly missed by all of us for his individuality and Bristol knowledge.  Brian leaves his wife, Jean, a daughter and two sons. There will be a full obituary to Brian’s life (as there was a great deal more to him than just Bristols) in the Summer edition of Bodacious.

Thirdly, thanks to Peter Campbell, we have an insight into what’s unfolding with BCL.  The Spares and Service site at Windlesham and the Showrooms remain in liquidation.  Peter, with his SLJ hat on, has been on site at Windlesham and has granted us the following information.  He said that the liquidator’s agents were on the ground and were working to sort out the situation. They were absolutely clear that this is the end of the line for the company.  He indicated that there is much that might be said in conversation, but cannot be written, as various activities continue to develop behind the scenes but, if expressed, the lawyers would get excited.

This gives good insight as to where this sorry story might end. The whole site at Windlesham has been sold to an engineering company that is pressing for vacant possession. The liquidator’s first priority is to release customers’ cars on site for sale,service or restoration. This task has been made more particularly difficult because none of the BCL staff are present and have not been on site for over a week. There appears to be no dialogue between BCL staff and the liquidators.

Trying to find the cars, marry them with the owners and recover any monies owing is challenging, particularly where cars are in a dismantled state and parts spread across the site. The liquidator’s second priority is to realise as much as possible from the sale of remaining stock in order to pay some money back to creditors, principally HMRC. The liquidator opined the prospect of any sale is some way off as, given the general chaotic nature of parts storage, cataloguing and valuing might take months. No-one was prepared to come up with a date but “late summer” was mentioned.

We remain in positive and useful contact with BOHT and BOC. There seems to be in both clubs a small number of members who have offered assistance should it be required. For further information on cars still on site, the contact for the on-site liquidator’s agent is Matt Hardy (of the firm Wyles Hardy) Tel 07974 356082.

Finally and above all, please do keep yourselves isolated, healthy and safe.

The Bristol Owners Heritage Trust now has a YouTube Channel with lots of interviews with former Bristol Cars employees and other people connected with Bristol Cars. You can spend a happy hour or so browsing throught these videos. 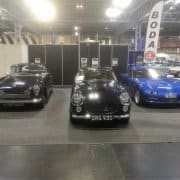 The Spring Dinner 2018 has been organised by Mike Murray who kindly offered to run the event.  The Dinner will be held at the White Waters Hotel, Llangollen.  The proposed dates are 6th-7th April 2018.  The itinerary will vary depending on the distance one has to travel, however, it is anticipated that there will be a group dinner on the evening of Friday 6th, various visits to local attractions on Saturday 7th April with, possibly, a speaker for our Spring dinner on Saturday evening then leaving at your leisure on Sunday.

The activities in the area are many and varied.  For example:-

via views of Bala Lake

The predicted costs are £99.95 per room (including full cooked breakfast) for Friday 6 April and £105.95 per room for Saturday 7 April.  A 3 course group dinner will be £24.85 per person, not including drinks.  A detailed menu will follow nearer the time.  A segregated parking area has also been arranged.

The details are not yet finalised but an expression of interest would be greatly appreciated.  Please email: mgdmurray@aol.com.

Currently, Mike has reserved 10 double rooms with more available but, as with all popular locations, they do get booked up so a speedy response would be appreciated.

The Committee are asking for volunteers to put forward events in their locality.  This ensures we get a change of venues and can take advantage of their local knowledge.