Congratulations are due to Michael Barton and Simon Charlesworth as Aero Dynamic has just won the Octane Magazine historic motoring awards Publication of the Year, a well deserved result for the publisher and author for a very compelling and special book. 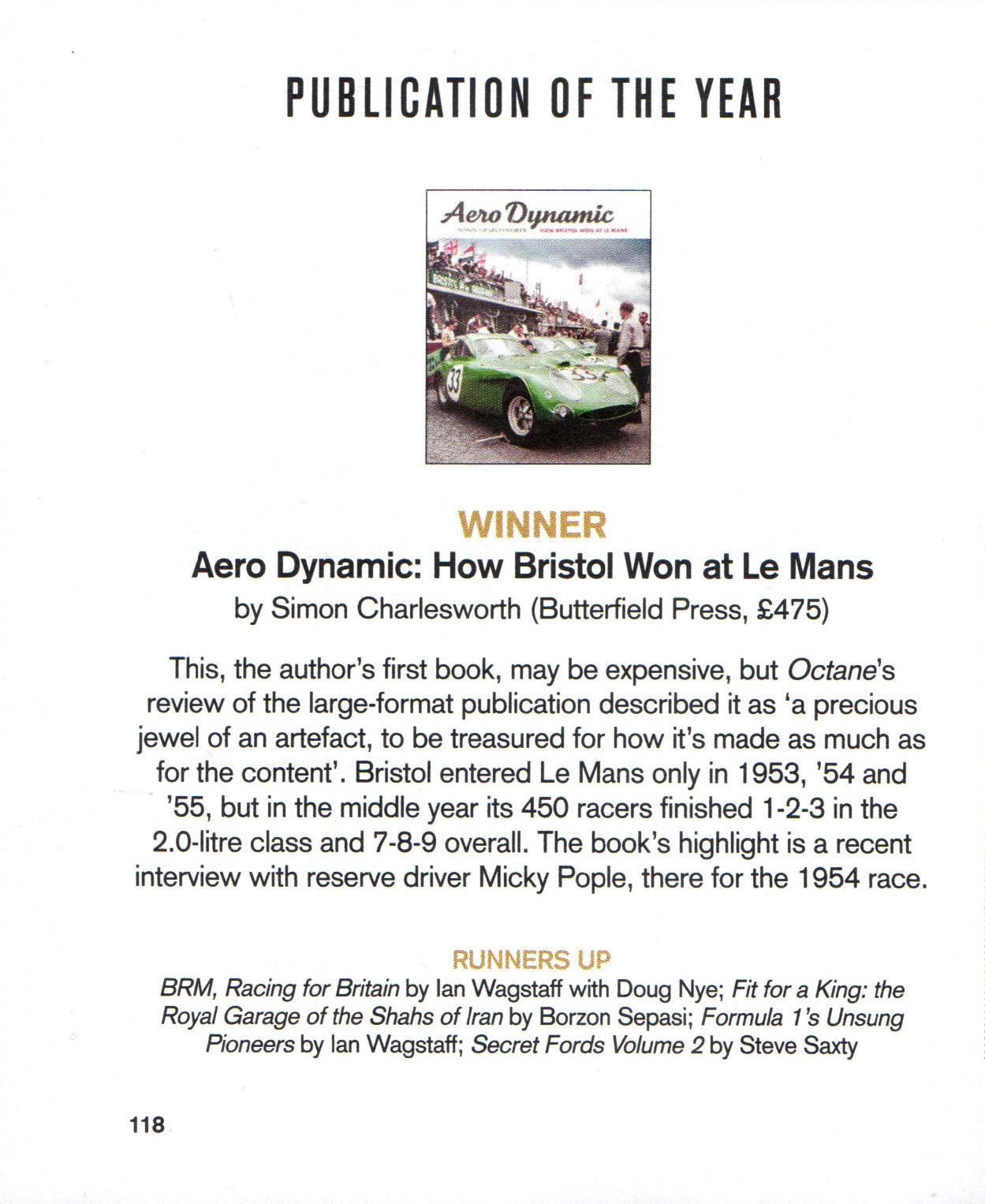 The Bristol 400 side lamp was Lucas type 1145 and part number 52070A (chrome plated body). That was a continued use of a pre-war design of lamp (type 1145, sometimes with a black finish body), which itself was a variation on a similar but larger/longer lamp of the same style that was introduced in about 1935 (Type 1150, usually chrome plated body – used by Humber on their 12 and 18 HP models from 1935 to 37)

A similar lamp was used by Ford on their English built V8 models from about 1935 onwards. That was probably made by Butlers and is quite like Lucas 1145 at a glance but shares no parts with it (Lucas lenses are horizontally ribbed, Ford lenses have raised lumps on either side of a central groove)

Lucas 1145 was used as follows for production models (other occasional uses would probably have been seen from coachbuilders or on specials):

I have attached two small photos showing out of date images from eBay auction listings. 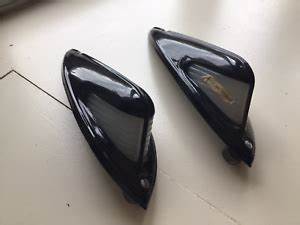 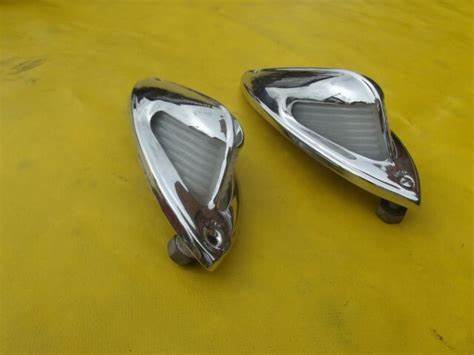 I just came across it and although it is for the Jensen CV8 some parts common to Bristol are mentioned and the other alternatives are interesting as they are listed in the groups that mention Bristol.

However do not assume that all parts in the list fit our Bristol cars!

In the November 2022 issue of The Automobile…

NO ORDINARY BRISTOL Ordered new by the chairman of the Bristol Aeroplane Company, then driven for a decade by arch-enthusiast Christopher Balfour, then uprated and campaigned in hill climbs and sprints by its next owner, this 1948 Bristol 400 is now in the hands of a young enthusiast. Toby Bruce tells its story……..

This morning the postman delivered another new book produced and edited by Richard Calver. It is an edited reproduction of the original factory service bulletins mainly for the home market and non-USA market V8 cars covering the period 1963 to 1976 , so CV8, Interceptor and FF with the 383 cu in engine and larger and the 727 automatic gearbox. So on the mechanical side especially relevant to anyone with a 411 but also to some of the other cars before and after with the 727 gearbox and to a certain extent the other engine sizes where similar components were used. There are obviously bulletins covering issues relating to coachwork problems, mechanical issues specific to the FF but an awful lot of information relevant to some of our cars, I can see hours being spent over the coming days picking and choosing topics within the books lavish covers.

An example, bulletin 6/71/6 Subject Failure of Gearbox Kickdown Band or Clutch, only a few short paragraphs but clear and easy to understand and giving the mechanic all the pointers needed to confirm and rectify the problem, on the following page 6/71/8 covers oil pump failure, 6/71/7 Standard Torque Tightening of Bolts. So not a book if you wanted to know the history of Jensen cars but essential if you want to know how they were maintained and repaired in period including recommendations of alternative and upgraded parts.

As these cars shared a lot in common with the Bristol V8’s of this period, for anyone doing their own work or who works very closely with their mechanic this book could be a very useful addition to the motoring library. Available directly from the Author,  just search the title of this topic, or from some alterative suppliers he recommends at a typical price of around £100/£120, not cheap perhaps but worth every penny in my mind for the information contained therein.

The Pegasus team felt an update on recent and current projects might be of interest to members. Recently, the supplier we had secured for windscreen rubbers decided to retire and his equipment was sold to a supplier who relocated to Poland and so our source was lost.  I am glad to say Bill Lawson has secured a supplier who can manufacture to the correct Shure hardness which is important for the seal to secure both the window and trim and avoid cracks at the radius.  This seal fits all the cars from the 406 onwards, so well done Bill.  A more detailed communication is due imminently on this.

Trevor Wilks has identified suppliers for most of the front screen and a number of the rear screens and this information has been reported in BODAcious.  Over recent months, Pegasus has funded him to look at rear screens for some of the cars where a supplier was not identified.  It appears the same rear screen fits the 406 to 410.  Pilkington have agreed to develop a mould to produce a supply of screens, the cost of which will be built in to the cost of the screens.  At present 14 of the potential 100+ members with suitable cars have expressed an interest in obtaining a screen and it appears Pilkington will do a first run.  The product will have heater elements so those with older cars who would prefer a heated screen with all it benefits should contact Pegasus promptly to secure one.  Future batches are likely to require a minimum of 25 items.

Andy Gibbs has secured the supply of door pulls for the early 400 cars and has sold the first batch of castings.  In addition, we have been approached to consider whether it would be practical to re-make the Pegasus wing badges for the 406.  The costs of this development were prohibitive for numbers which people were seeking so it was not a project which the team could support.

The Pegasus team have also evaluated the development of brake discs as it was suggested that there was no commercial supplier for a number of models.  After careful consideration, due to the safety significant nature of the product,  it was felt the complex quality assurance demands of production, the potential risks to owners and others should the QA not be appropriate and the associated indemnity risks were such that the project was abandoned.  Pegasus has made a decision not to engage in the production or marketing of brake discs.  As it transpires, further investigation showed the initial concerns were unfounded and the team has identified commercial suppliers for brake discs for our cars. The Team can provide members with the details of those companies who are able to provide quality assured products.

Finally, if members require any of the above or have concerns over access to parts for their car, do flag these up to the team and they will review our information to identify possible sources and suppliers.  It is from this work that future Pegasus projects develop. All you have to do is fill out our Parts Enquiry form with your requirements. This form can be found under Pegasus Parts on the website but is available to members only.

Colemann Classic Cars has just announced on their Instagram page that Brian Marelli will be back working from 4 May and open for consultations!

Recently two new companies supplying spare parts and services for Bristol cars have been established. Both companies are very active on Instagram so check them out.