RELAYS AND OTHER RELATED ISSUES

Recently, it was reported on various Bristol Forums, that owners of at least one model, the 411, were experiencing Ignition Switch failures. Initially, these parts were replaced, only to have a similar issue a short time later. Understandably, owners were less than pleased after the replacement failed again, and this article attempts to illustrate the reasons why, and to recommend a remedy, that is well proven.

Having been employed at a leading company in the Motor Industry in Coventry for over thirty years, reliability testing was a major part of my engineering activities. This involved the logging of prototype vehicle test data to prove out the various electrical components. The information thus gathered then gave an indication of the vehicle lifetime expectancy of each item, and this could be used for warranty investigations later on, if required.

Major electrical loads were monitored during the tests, including air conditioning, cooling fans, external lighting, heated rear screen, heated front screen, electric windows, seat heaters, and in-car entertainment ( radio/ amplifiers, TV etc.). Data from component suppliers was also analysed, to ensure that, for example, the ignition switch, was being operated under electrical load conditions appropriate to the supply company’s recommendations. Also, back emf (the spark that appears across the contacts) at switch-off, did not exceed the limit outlined in DIN57-879. This Europe-wide specification relates to radio frequency interference by induced transients from inductors, ie, motors and solenoids, and requires sufficient suppression to be fitted to eliminate the effect.

The table below, illustrates some of the issues involved, with measurements taken before and after suppression components had been added, clearly demonstrating an improvement and compliance with the DIN regulation, (36V max @ 1mS duration).

Over time, the energy generated across relay contacts at switch-off from unsuppressed components, will burn away the contact faces, and lead to switch/relay failure. Adding the suppression improved the reliability of the circuit components, and thus reduced failures to a minimum. Good for customer satisfaction.

A similar approach was taken with external lighting, where values obtained for the switch-on current of filament lamps were also measured. These included sidelights, head and fog lamps. The following table gives some of the results that could be applied to the wiring systems of Bristol cars:

Also, the value of current that could be reliably passed by the ignition key switch was determined to be approximately 20 amperes. To switch more than this limit, several load relays were introduced to power up the various vehicle systems controlled by “Ignition ON “. These included headlamp flash, headlamps, fog lamps, heated rear/front screens, air conditioning, seat motors, In-Car entertainment systems, and fuel injection/engine management.  The circuitry included fusing for each relay controlled load, and reduced the amount of current directly switched by the ignition key. This reduced the probability of electrical failure of the ignition switch by a considerable margin. Also, the impact of Vehicle Construction and Use Regulations, and Federal (USA) NHTSA legislation, led to circuit evaluation for compliance. For example, all cigar lighters at that time, were required to be switched by the ignition key, and driving/ fog lamps if fitted, were to be switched in pairs, and not individually. These legislative requirements were subsequently incorporated into the circuitry.

This is sourced from a Range Rover application amongst others for the 411 model, but the following set of conditions leading to failure, would apply to most other vehicles produced by Bristol with similar wiring/circuitry. Excessive loading leading to early contact failure, especially with the cigar lighter sockets being used to power up various items such as games and DVD players for the rear seat passengers, combined with heated rear window current, plus the usual driving aids such as demisters, windscreen wipers, and cooling fans, will cause the ignition switch contacts to fail after a short time. This is exactly what happened previously.

The following re-routing of the circuits is applicable to most of the later cars from 408 onwards, as the wiring is terminated in the right hand wing locker, and the circuit colours can easily be identified and modified. Of course, when designing circuitry for a new vehicle, one relay would supply two or three additional loads, however, when modifying existing wiring, individual load relays are easier to include without a major strip out of the wiring looms.

See Appendix 1 for the wire colour designations, these follow the old Lucas wiring colours, but for some applications, owners should consult the vehicle handbook/workshop manual for specifics.

The following Key-In Ignition ON loads supplied directly from the ignition switch should be removed, and powered up via an additional relay

This then leaves the ignition circuits, wiper motor plus the radio, (without external/ additional amplifiers) at about 12 – 14 amps, that is well within the load capability of the key switch.  .

This is a function of the indicator switch stalk. However, the contact rating is about 10 amps on my car (a 408 MkII), and looking at the current in-rush values for the main beam filaments in Table B, it can be seen that flashing four headlights results in a combined in-rush current of 190 amps for 10mS duration, after which the steady current is 19 amps, almost twice the rating of the switch. Also, the voltage at the lamps is reduced, and hence the light output, because the cross sectional area of the wiring to the flasher switch is too small. This is another circuit that requires a relay to switch the filament load.

The supply to this circuit should be removed from the ignition switch as previously discussed, and the following additional modification ought to be carried out. The cooling fan circuit utilises a thermal switch manufactured by Otter, situated in the radiator header tank. This switch controls the fan relay, and will fail if the relay coil is not suppressed. The back emf (spark), generated at switch off on an unsuppressed relay, is typically as high as 92 volts for 2mS duration. This appears across the thermal switch contacts that open relatively slowly when compared to similar relay contacts. The slow opening speed draws an arc across the air gap as the contacts move apart, and erodes the mating faces. Eventually, with carbon build up, the contacts when made will be of a high resistance, and the relay will fail to operate because of it. Therefore, a 0.1 microfarad capacitor should be wired in parallel with the relay windings to eliminate the issue. These suppressors are readily available from accessory suppliers

The only modifications that I have carried out to my own vehicle, a 408 MkII, are the suppressor modification on the cooling fan relay, a headlamp flash relay with a fuse in the power feed, fog lamps paired up with their own relay, and changed the starter relay for a plug-in type, as the original had burnt contacts. Additional fuses have been fitted in the headlamp circuit, the front fog lamp pair, and the rear fog lamp pair. As my vehicle is without a heated rear screen, the cooling fans remain wired through the key-switch as is, the load current is about 10 amperes. All of the applications discussed previously, can use relays sourced from Jaguar parts suppliers, See Appendix 2.( NB The cigar lighters on my vehicle are powered directly via a fuse from the battery, and therefore are not controlled by Ign-ON.)

When attempting to modify the circuitry, it is recommended that the cheaper alloy type of lucar spade terminations are not used, as electrolytic corrosion will ensue in damp conditions, owing to two dissimilar metals being brought together in the cable crimp, ie copper and aluminium. Always use either brass or tinned brass for these crimped terminations. Again, these are available from companies that advertise in classic car publications and the Internet.

Regarding the 411 ignition switch failures. These occur because the original circuit design did not take into account the maximum current that could be reliably switched by the contacts. Having the air conditioning on, with the wipers and demisters running, plus the heated rear screen and other accessories being powered from the cigar lighter socket(s), would probably produce a back emf at switch-off, that would easily erode the contact faces of the switch element in a relatively short time. Changing the switch again is only a short term solution, and the only effective method to eliminate premature failure, is to apply the circuit changes discussed in this article.

Many British designed vehicles use colour coded cables to assist in identifying the various circuits in use. This is an extract from BS-AU7a 1983 Colour Code for Vehicle Wiring, from the British Standards Institution, 2 Park St., London W1A 2BS.

(Note that these colour codes may not apply directly to older cars. For example, the wipers on cars up to 1980 (at least) are not on a separate fuse circuit, so they are not orange, but green. Check the schematic for your car to be certain.) 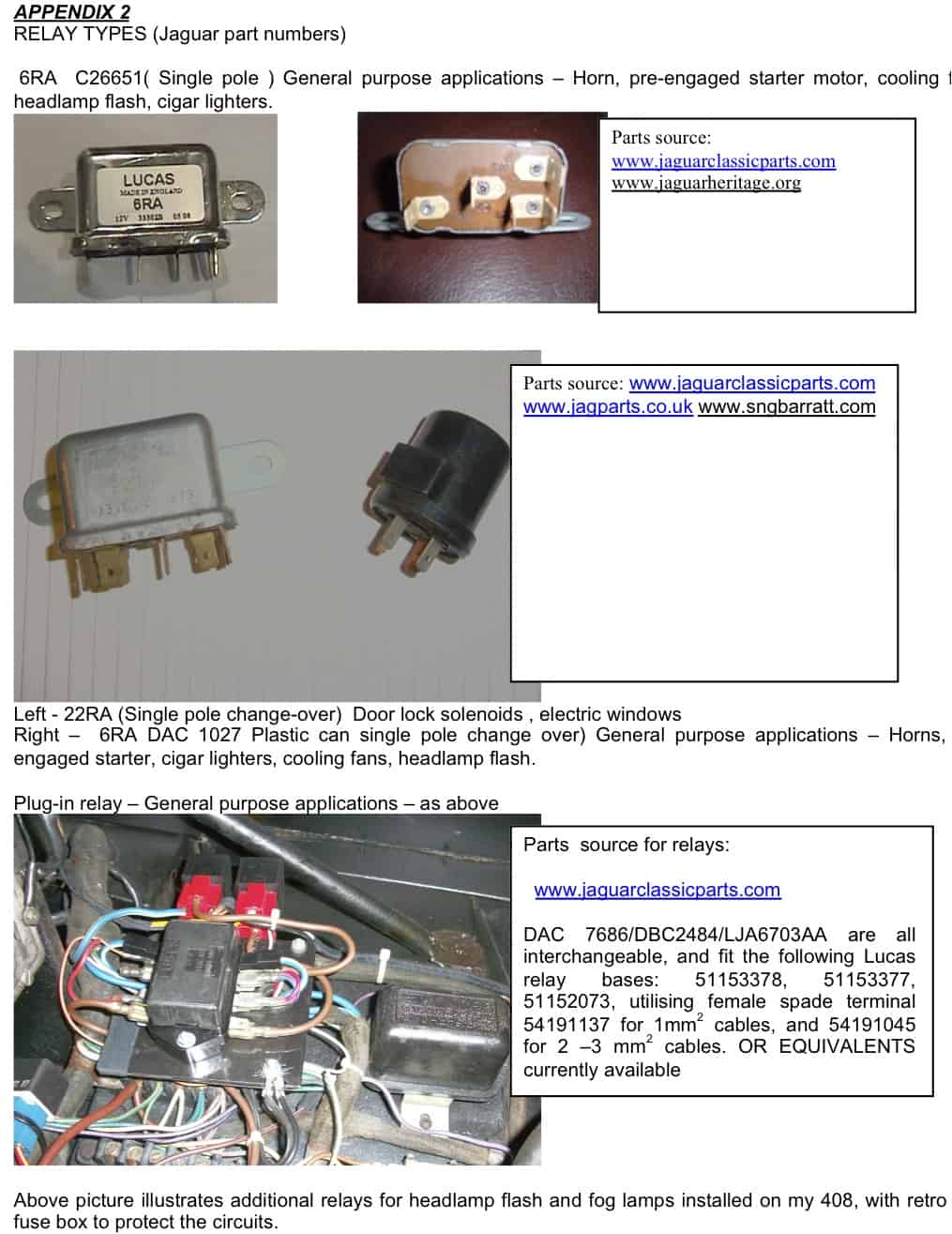